You may have already seen the latest trailers for Keanu Reeve's latest movie "47 Ronin", however what you may not know is that the movie has little resemblance to the legendary tale of the 47 Ronin. While the new movie must embellish the story to make it entertaining for the cinema going audience, it's a shame that at the same time, it loses any essence of the original story, with the only similarity being that there are 47 Ronin in both stories.


In the original tale, a group of 47 Ronin are left leaderless when their feudal lord was compelled to commit "seppuku" (this is a ritual suicide) when he attacked a court official. The 47 Ronin avenged their former leader by killing the court official after almost two years of planning. However, as these Ronin had now committed the crime of murder, they too, were compelled to commit "seppuku".

This tale obviously shows a lot of elements to the legendary Ronin, such as loyalty, persistence, honour, and of course, sacrifice. All of these I doubt will be conveyed in the upcoming Hollywood adaption, especially with Keanue Reeves' wooden acting.

If you would like to learn more about the story, please search for Chushingura which is the collective name given to the various media based on the historical incident. 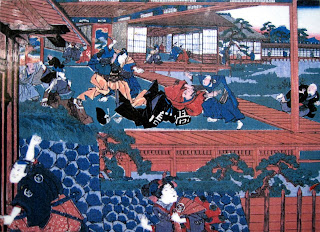 Asano (the feudal lord of the Ronin) draws his sword on the court official, Kira.
Posted by Unknown at Wednesday, July 31, 2013